Let’s talk “MAD MEN”.
Has there ever been a living soul who didn’t wish they could go back in time to the 60’s….or for some, wish they could re-live it. Now let’s talk specifically about the clothes during the 60’s shall we? What I enjoy most about the show “Mad Men” is that as the seasons have past and the characters build and develop, the stylistic design changes along with them in almost every aspect of the show; from the first season when the characters are living in the beginning of the 1960’s to this current season in 1968. Don Draper’s new office building, the interior design, furniture, technology, and yes… the CLOTHES all modernize and update to the later 1960’s. From the very first episode, one can see the tones of the 50’s still lingering in the new age of the 60’s Don and Betty were currently in. And as the seasons pass and things progress, so does the style of “lingering 50’s” to ‘cat-eyed’, skinny-tied, “WOW” crazy-patterned colored dresses of the later 1960’s. A great comparison to showcase this progression throughout the show is to view side-by-side Don’s first wife in the first few seasons next to Don’s second wife, Megan, in this current season. I am aware that the two ladies differ stylisticly, but even so, Betty’s wardrobe consisted of the frilly nightgowns with the princess sleeves and the classic Dior look of the 50’s (the poof–full skirt that falls to the mid calf). Megan looks more like she just came out of a groovy Austin Powers flick. You could safely assume she is what most people in today’s generation identify the 60’s with fashion wise. The huge swirly hair-sprayed hairdo’s, the chunky necklaces, earrings, and bracelets, and that funkadelic wardrobe of hers all in bright colors, metallics, and vinyl white knee-high go-go boots. All I can say is, “Hello 1968”! 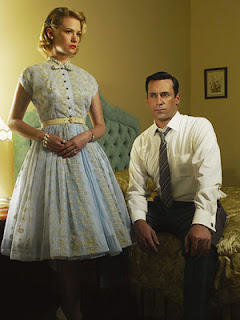 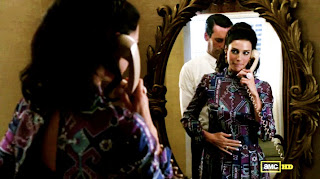 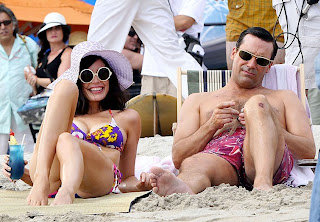 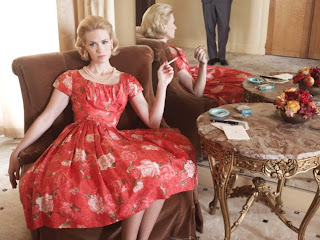 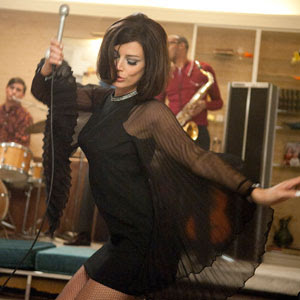 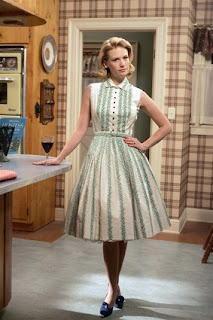